Role of Women In Socio-Economic Development of Ondo Kingdom

Women generally have peculiar instincts, especially when examining issues relating to social and economics matters. Such instincts could be seen in their attitudinal behaviours exhibited in trading and cultural practices. The Ondo women, like others across the World also possess social and economic instincts which are put into play to promote the socio/economic development of their town. This is evident in the level of activities in which they are involved. However, one major area where the contributions of Ondo women to the development of their homeland can easily grasped has to do with the practical demonstration of certain norms, belief and customs which are instilled on their children. 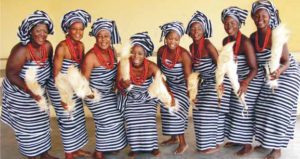 This usually starts from home, for instance in the training of the female child. An Ondo woman would ensure that attitudes such as cleanliness, hard-work, and patience among others are imposed in the minds of their female children to prepare them for the future roles of house wives. Hence, before getting married, an Ondo girl is usually given some tasks to carry out at home such as sweeping, cleaning, cooking and fetching of water among other domestic chores. Besides, she is also tutored on some social and cultural values like greetings, dressings and paying respect to elders to mention a few. In the same vein, the male children are also given training in some cultural and social values to prepare them for future challenges as husbands. However, within the context of what has been written above, one particular attribute for which Ondo women are noted for is the role they play in the education of their children.

It is a common practice to note that greater percentages of Ondo women are willing to sell their possessions for the simple reason of educating their children than owing material things. They would always be heard singing “ere omo mi o, ma je na le o” (meaning I will invest on my children to enjoy in my old age). Perhaps, this is responsible for the high level of educational attainment and socialization for which the people of Ondo people are noted. In the same vein, early childhood training, the Ondo children are exposed to by their mothers could be responsible for the low rate of juvenile delinquencies in the town and hence the relative peace pervading therein despite the rapid changes in its social and economic status. Before the advent of civilization, it is generally regarded as an abomination for an Ondo person to get convicted and sent to prison. Anyone who has the misfortune of being convicted would be ostracized by the people who would want to have any interaction with such persons. The situation was so serious to the extent that a convicted person may find it difficult to integrate within the environment even after serving his/her jail term. He or she may sometimes find it difficult to marry or bestowed with position of authority in the town.
Those were the time when the values system was held in highest esteem and mothers were actively involved in the activities that would help to mould the character of their children. Hence mothers in Ondo Kingdom then were playing significant, legislative, executive and judicial roles in the family. In fact the past children who grew up in Ondo whether male or female usually dread the presence of their mothers than their fathers because of what they regard as highhandedness on the part of their mothers who would spare no time to spank them if they failed to understand the message passed across which were transmitted then through the use of one of the crudest and easiest ways of training that was the use of the senses (i.e. eyes, legs, fingers and hands) and sometimes through folklore and tales. In fact, it is generally believed among the Ondos in the past that a true son and daughter of the town who in local palace are called Omoloore Ondo literally interpreted as a well behaved Ondo sons or daughters should not be involved in any matter that could tarnish the name of his/her family by going to prison. Mothers in Ondo are always in vanguard of those who would always ensure that their children are not involved in any crime that would bring the family name into disrepute. I would however not dissipate much energy on the olden days method adopted by Ondo women for training of their children but would rather concentrate on the subject matter of this discourse by identifying the various contributions made by some women of Ondo extraction to the development of their biological home.

It is worthy of note to see that women have been making valuable contributions to the development of Ondo since the creation of the town over 500 years ago. In fact, the story of Ondo cannot be completed without mentioning Oba Pupupu, a woman and the first Osemawe of Ondo Kingdom who reign between 1510-1530 A.D. Besides, the record laid by this legendary female Monarch, there was also the history of a woman warrior called Yeye Taagba whose traditional herbalist medicinal prowess was said to have played significant role in retention of the present Ondo Kingdom from the hands of external aggressors who were troubling the town during her time. There is also the history of “Yeye Gbanejoke”, a prominent successful businesswoman mogul, slave trade merchant and the first ever richest Ondo woman in the history of Ondo Kingdom who acquired the vast majority of Ondo landscape and till today her generation enjoys the most recognized popular and famous family title name as Gbanejoke (omo gbesokun).

Notwithstanding, the achievements of these three legends recognized above, the present generation of women in Ondo have been making meaningful contributions to the development of the Kingdom. While some have excelled in their chosen profession and has brought honour to the town through this, some have ventured into businesses and other areas commonly dominated by the men to make their presence felt. Again, another area where the industrious instincts of the Ondo women are further demonstrated is in their desire to own properties like their male counterparts. It is therefore not an exaggeration to assert that women in Ondo Kingdom have at least three out of every ten houses in the town. Therefore, when viewed against this background, it is not an understatement to say that women have made some positive contributions to the social-economic development of the town which is visible and could simply be described as an enduring legacy.