Situated in the Southwestern belt of the Nigerian rainforest, Ode Ondo or Ondo City has a population of half a million people, making it one of the largest cities in the state named after it. Its traditional ruler, the Osemawe is a descendant of Oodua, the founding King of Yoruba Kingdoms.

The location of Ondo in the middle of Nigeria’s rain forest but with good access to the coast made the city a major transit point to northeast Yoruba land during the era of Yoruba civil war. Its strategic location led to its rapid rise as a conduit for goods from Lagos into Yoruba land, and subsequently attracted Christian missionaries who established the first mission church, St. Stephen’s Oke-Aluko in 1875. The coming of Christian missionaries, many of whom were anglicized Africans, had a lasting impact on the community. First was the establishment of a primary school which trained catechists and teachers, as well as what were then Native Authority clerks. The functional education received in the primary school also led to new commercial ventures such as cocoa and rubber farming, a shift to a measure of cash crop farming. The Ondos also left their community to trade with Europeans in what is called “Eti Odo” (the riverine area adjoining the present Ondo and Ogun states) as retail merchants, representatives of European trading companies, and interpreters to foreign merchants.

Ondo Traditional Political Organization: Traditional political authority is vested in the King (Oba) who is generally considered the spiritual and political head of the Ondos. He heads the Council of senior chiefs called Eghae; these are (Lisa, Jomu, Odunwo, Sasere, Adaja, and Odofin) who with him make up what is considered a cabinet, referred to in other Yoruba towns as Iwarefa. The Obaship is hereditary, and currently, three ruling families are recognized to produce candidates, one after the other. These are: Okuta, Foyi, and Leyo. The coral beads worn on their wrists and ankles as well as the big drum “ugbaji” which they and a few Ekule Chiefs are entitled to beat during ceremonies distinguish the Eghae. Next in rank to the Eghae are the Ekule Chiefs who are six in number. They are Arogbo, Logbosere, Odofindi, Sagwe, Sara, and Lotuomoba. There are other junior chiefs under the Ekule category. Elegbe Chiefs are third in rank and consist of Ayadi, Orunbato, Sokoti, Gbogi, Luogho, Losare, Lijoka, Lijofi, Loyinmi, Odole, and Saogho. Most of the ward chiefs in the city report directly to Elegbe principal chiefs named above. Elegbes under Ayadi performed security functions. There are other chiefs under the 15 Elegbe Chiefs such as Yegbata, Bafan, Lomafe, etc. Apart from these chiefs, there are also chiefs for spiritual duties called alarowo. They are Sora and Akunnara, who are Oramfe priests. 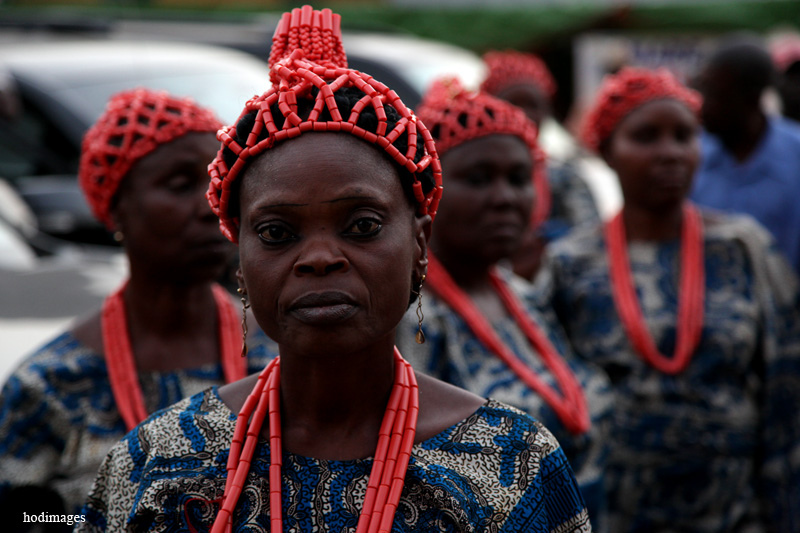 Apart from male chiefs, there are also women chiefs headed by Lobun (female King) who is in charge of the community market and who has an important ritual function in the crowning of a new King. Ondo is one of few Yoruba kingdoms with a tradition of female kings. Indeed, Ondo’s first king, Pupupu, was female, thus making Ondo city one of the few spots with age-old traditions of gender diarchy or balance of power. Other female chiefs are Lisa-Lobun, Jomu-Lobun, Orangun-Lobun, Sasere-Lobun and Adafin. Other lesser grade female chiefs are Odofin-Lobun, Ogede-Lobun, Sama-Lobun and Awoye-Lobun. The Eghae selects Lobun while other women high chiefs select their colleagues whenever a vacancy occurs. The female king is a principal character in the coronation of a new king in Ondo. Although colonial rule and successor independent governments have eroded the traditional authority of the Oba and his chiefs, nevertheless the Oba is still highly regarded as representing the collective identity of Ondo people, an intercessor between his people and government, and the custodian of Ondo culture and tradition. These traditions are enacted and reaffirmed through such ceremonies as Odun Oba, Oramfe, Ogun, and the modern Ekimogun Day celebration. Modern government in Ondo follows the same pattern as in all parts of the Nigerian Federation. The federal constitution, notwithstanding the peculiarities of Nigeria’s ethnic groups, decreed a uniform local government with elected chairmen and councilors. There is no constitutional or statutory relationship between the local government and the traditional system of governance although the court in the Oba’s Palace still serves as the preferred court of first instance in civil cases.

Ondo Economy: Most Ondos are farmers producing cash (cocoa, rubber, and timber) and food crops (yam, plantain, cassava, and palm produce). Local indigenes as well as non-Yoruba transient migrants who sell clothing and household products engage in retailing. A service sector consisting of building construction, motor servicing, and furniture making is also prominent. There is an emerging phone and Internet service that connects Ondo to other parts of Nigeria and the world. There are also a few manufacturing or industrial plants such as wood processing, stone crushing, cocoa beans processing, and paper products. Ondo has a few commercial banks, four of which are branches of nationwide banks while the others are community banks. There are also four hotels and a large market situated in the centre of the city.

Ondo and Education: The positive and beneficial impact of the presence of missionaries in Ondo led the community to establish the first community secondary school in Nigeria and the oldest secondary school in the Old Ondo and Benin Provinces (now Ondo, Ekiti, Edo and Delta States). Named Ondo Boys’High School, the secondary school was incorporated in 1919 after six years of informal existence under a Durham Universitytrained Classics graduate, Reverend Moses Craig Adeyemi, an Ondo indigene. To the credit of Ondo community and the founding principal, Ondo Boys’High School grew to offer education to young boys and later young girls before reverting back to an allmale school in keeping with its founding tradition. The spirit of community development, which led to the founding of Ondo Boys’High School, is still evident in Ondo after about one century of the establishment of the school. To the credit of the Ondos, the following institutions were established by community efforts; Ondo General Hospital, Ondo Divisional Teacher Training College, and Ondo Civic Centre. Whilst the General Hospital and Ondo Divisional Teacher Training College have become respectively State and Federal institutions, Ondo Civic Centre is being developed under Ondo Development Committee, a civil society group with a mission to promote Ondo development. Higher education in Ondo

In Nigeria, the Ondos are known for their thirst and quest for education. This community’s ambition led many Ondo indigenes into professional studies: law, engineering, medicine, diplomacy, banking, and academics. A degree awarding institution in Ondo, Adeyemi College of Education, which has been in existence for over 35 years, is currently being joined by the Methodist University of Science and Technology, to place Ondo in the league of University towns in Nigeria. At present, there are twenty secondary schools in the city. The importance of professional and academic training to Ondo people is best illustrated by the fact that three of the national merit awardees in Nigeria: Professor Oladipo Akinkugbe of Medicine, Professor Oladayo Oladapo of Engineering, and Professor Olu Adegoke of Geology are from Ondo. Traditionally, Ondo’s quest for education has taken its sons and daughters to the United Kingdom and the United States and Canada. For example, there is no single household in Ondo town without one family member studying or working in North America or Europe.

Investment Climate: Ondo provides a favorable environment for internal and external investment. It is rich in agricultural resources and thus a viable site for agricultural industries. It is only a few miles from the major centers of bitumen deposit and the proposed seaport and free trade zone between Ondo and Ogun states. It is also a city that is well endowed with modern real estate. In addition to a viable internal population, Ondo has a network of roads that link the city to major population centers such as Lagos, Ibadan, Akure, Benin, Ijebu-Ode, Warri, Asaba, and Onitsha. Religious pluralism and tolerance of plurality are abiding aspects of Ondo traditional culture.

As a British Citizen and Bonafide Yoruba race person. The Human Rights Act 1988 of …