Ondo Town: A C.M.S Mission was opened in Ode Ondo in 1875, and in 1877 the Rev. (later Bishop) Charles Phillips arrived. The Lagos government took an interest in Ondo, hoping to find a route to the interior of Yoruba country which would by-pass the area continually stricken by Ibadan-Egba-Ijebu wars. Although the southern part of the Ondo kingdom was very sparsely inhabited it was recognized as being within the domain of the Osemawe; and both Takuro, an Ijesha who settled at Aiyesan in 1881, and Ipaiye, an Ile Oluji man who had been a slave in Lagos and who founded Ajebandele in 1891, sought the permission of the Oba to settle in his kingdom. In 1898 Agbabu was opened at the instigation of the British Traveling Commissioner, and goods from Lagos were shipped to this port and then head loaded along the bush paths to Ode Ondo. With the construction of roads from Ode Ondo to Ile Ife, to Akure, and to Okitipupa, the importance of Agbabu has declined”–From P.C. Lloyd, Yoruba Land Law, 1962.

“Little is known from the legends of early Ondo history following the succession Airo; few majors wars are cited and at no time is Ondo supposed to have been subject to a neighboring kingdom. Initially Ode Ondo consisted of the indigenous settlements and of the immigrants from Ife. Among the latter were the titled hereditary priests – Akunara, Sora, Odogun-whose compounds today form quarters of the town. As the town grew in population the reigning Osemawes founded new quarters by cutting a street through uncleared land and appointing a minor chief and a host of followers to live along it. Each quarter makes annual sacrifices to the Oba who founded it. The creation of the quarters does not seem to represent a growth outwards of the town; the earlier settlements were widely separated within the walls and the later streets were built in the gaps. Ode Ondo was abandoned as a result of civil wars c.1830 or 1840. Arilekolasi, an unpopular but wealthy and autocratic Oba, refused to abdicate his throne. His slaves supported him and set up a camp at Oke Igbo calling on the Ife people to support them. Other Ondo fled south and east to the Ishan towns, and several successive Osemawes reigned in these settlements. The first British government official to visit the area reinstated the Osemawe in Ode Ondo in 1872. It said that the whole capital was rebuilt exactly on the pattern of the former one, as old landmarks were easily traced; however, a little more regularity in the layout of the new town would seem likely”–P.C. Lloyd (Author) of Yoruba Land Law (1962).

Ondo cont: Some of the Ode Ondo farm hamlets claim great antiquity-Oboto was, say its legends, founded by the third Osemawe. Others of later foundation were created when powerful Ondo chiefs sought the permission of the Oba to settle their slaves and followers hitherto unfarmed areas, adding that these new settlements would also protect the capital from attack. Since the introduction of cocoa there has been a rush to the forested margins of the kingdom (not excluded from farming as Forest Reserves) and in particular to the area of the Owena river, where numerous settlements have been built both north and south of the Akure road. These recent hamlets have been settled not by chiefs and their followers but by individuals. Many people live for long periods at these hamlets but all return to the capital for major festivals.—P.C. Lloyd: Yoruba Land Law (1962) Oxford University Press. Next Social Structure of Ondo.

Ondo structure is characterized by the manner in which succession to rights is traced not exclusively or even predominantly in the male line but in both male and female lines. Educated Ondo today adopt the personal of the father or paternal grandfather as their own surname, and intend that this surname shall be borne by their agnatic descendants in the English fashion. But, traditionally, the Ondo man is saluted with oriki (praise names) of as many of the ancestors from whom his descent is recognized, whether in male or female line. All Ondo bear the same facial mark-a single stroke on each cheek; some body markings are given in the male line only-e.g. The three cuts across the right breast of the agnatic descendants of the Osemawe. Food taboos are associated not so much with descent groups as with deities. A man traditionally worshipped a deity discovered for him Ifa divination and not necessarily associated with a descent group. Political office, as the next section will show, is not usually hereditary. Rights of property pass to all issue without distinction as to sex. An Ondo cannot, in theory, marry anyone tracing descent from any common ancestor; in practice this is interpreted as prohibiting marriage between person related within four generations-though elders are apt to reckon those four generations from themselves and not from the young people concerned, and many men from large descent groups often find it difficult to select an eligible wife.

Since the royal body marks are inherited in the male line, and the right to the title Otunba (Oton-oba-child of the Oba) in both lines, and since the non-royals of the town, the commoners use the term ebido to designate themselves, one would expect to find a large royal lineage or descent group. But no such corporate group exists. Those using the title Otunba all seem to trace descent from an Oba of the last century and a half, and none trace it directly from earlier rulers. In ceremonies performed by the Otunba, these princes do not seem to group themselves according to their descent from early rulers. Chiefs holding hereditary titles describe the title as oye idile (a title of the idile), but they, too do not recognize a corporate lineage. Those living in the compounds and quarters of the hereditary chiefs and titled priests usually trace their descent in male and female lines form a recent holder of the title. The names and graves of earlier title-holders are usually unknown. Thus, in the case of the royal descent group and those of the hereditary chiefs and priests one does have a group tracing its ultimate origin from one of the earliest founders of the town.

But most of the descent groups (ebi) which are recognized in Ondo are bodies of persons tracing descent from a known ancestor who, from the legends told of him (or her), almost certainly lived within the past two centuries. The myths state the family to which the ancestor was born, but this is of slight significance. For instance the legendary Mode came from an Ondo family which had moved to Ilesha. Although it is said in Ode Ondo that half the town are descendants of the Mode, the eponymous ancestor is placed only six generations above living elders; there is no reason to suspect genealogical foreshortening in such instances, for corporate segments are formed with each generation. The mere size of the Mode group inhibits activity as a corporate group and it is the smaller segments which are important. Many important descent groups trace their origin from famous nineteenth-century chiefs. The Rev. Phillips recorded that such chiefs appropriated a large number of women as wives, and, allowing their sons and followers access to them, claimed the resulting children as their own. Many descent groups seem to have been founded by women, in some cases it is said that the woman was wealthy and acquired land, building her own compound. In other cases the group is named after a prominent son but includes all the descendants of his full siblings.

Such descent groups have few corporate activities. They are not united in religious rituals. The house or compound of the founding ancestor, and any subsequent building on the site will be the ‘family house’ and meetings will be held here. But these sites are small and most members of the group will build their own houses elsewhere either on the family land of an intermediate ancestor in the group, or an ancestor of another group, or on hitherto unallotted land which will in turn become the family land of the descendants of the builder. Graves are not long remembered (and the evacuation of Ode Ondo in the nineteenth century would make knowledge of early ones unlikely); a man calls on his ancestors by dipping a big toe in the blood of the sacrificial animal and not by ceremonies on the relevant grave. There are few meetings which members meet to sacrifice to remote ancestors. Regular meetings of any kind are unusual. Members of a descent group are expected to attend the marriage or funeral or the installation as a chief of any member of the group; but these are social occasions. Members of a large group are scattered throughout the town and do not form a territorial residential unit; they do not usually farm together. But in the campaigns between rival candidates for a senior chieftaincy title, a man is expected to support the man most closely to him above all other considerations. 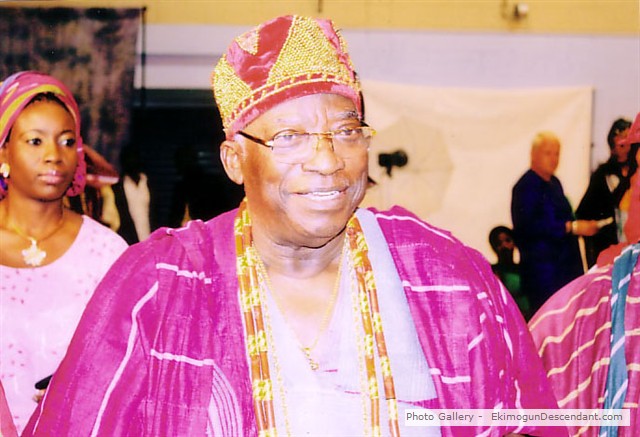 The head of a congnatic descent group-the olori ebi-is its oldest man, or more rarely an aged woman. Each segment has its own head and in some groups where the individual segments are more important corporate descent groups in their own right (e.g. as a result of holding valuable property) these segments take it in turn to provide the olori ebi. The head assumes office without ceremony. In a recent instance, however, a descent group took its new olori ebi to the customary court to be recognized by chiefs, not because such recognition was thought necessary but so that the chiefs might discount any dealing the group’s land to which he was not a party. The control of land is causing the Ode Ondo descent groups to be much better organized than in the past. The lead has been taken by the Awosika family association. This group claims corporate rights over land on the north side of the Akure road and a quarter mile from the town walls. Awosika held the important title of Sashere until his death in 1908, and was famous as a progressive leader and for his efforts in bringing British administrators and missionaries to the kingdom.