ODU: The Concept and Mystical Interpretation

History, Tradition, Videos Comments Off on ODU: The Concept and Mystical Interpretation 21,949 Views

**For Those Who Wish To Learn**

The popular impression among the faithful of ‘Ifa’ and ‘Orisa’ tradition and scholars alike is that Odu means womb, among other meanings postulated at different time without putting the other usage of the term into consideration. To an ordinary Yoruba person, womb to literarily means apo ile omo i.e bag that contains foetus. Hence, one will be tempted to ask how ‘Odu’ becomes a bag that contains foetus. Is it the same bag that contain foetus that Yoruba’s associate with the name of God i.e Olodumare and their progenitor?This essay tends to unravel the reason behind various usages of the term ‘Odu’, and its mystical interpretation, for the purposes of putting it straight that ‘Odu’ means mystery, and womb will not be enough to encapsulate it.

THE CONCEPT OF ODU

In the ancient Yorubaland, till this very moment, ‘Odu’ is variously used to mean different thing or entity. This range from the marking system of ‘Ifa’ to being a wife of Orunmila.

ODU AS A MARKING/WRITING SYSTEM

According to wande Abimbola in his book, ‘the sixteen major Odu’ (2006), he postulated that Odu is the combination of four signs that babalawo mark at each side on Ifa divination tray. This view was corroborated by Oluwatoyin Vincent Adepoju, when he said on my facebook wall that ‘the Odu are also organisational categories in Ifa, the system of knowledge, spiritual development, and divination enabled by Orunmila and Odu his wife. As awesome as these two scholars views are on Odu may be, they did not explain why the name of Orunmila’s wife is be used to describe the Yoruba marking/writing system.Prior to colonization, Yoruba’s encode and decode information they receive from Orunmila 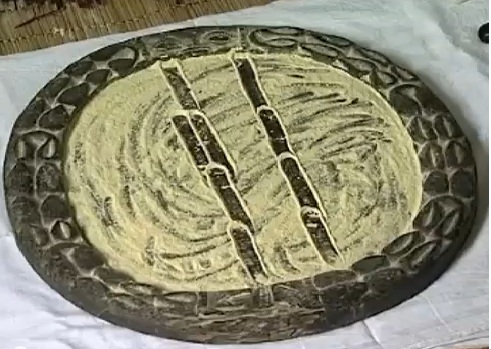 through ikin merindinlogun i.e sixteen nutshells by marking it on ifa divination tray since writing is the process of putting idea, views, opinion etc into signs and symbols e.t.c which they also termed Odu with the understanding that it stand for what Odu really means.It should be noted that Yoruba’s name things based on the function it perform e.g fridge, Yoruba named it Ero amunu tutu .i.e technology that get stomach cold. This is because, whenever cold water is drank, it gets the stomach cold.

Odu is a term that is seen in the Yoruba name for God, and Oduduwa, who happen to be the progenitor of Yoruba race. But, this essay will focus on the relationship between Olodumare and Odu. Odu is the mystical attributes of God, because he is the only being that knows all things that is known and unknown to the Irumole. Orisa and human being alike than we know ourselves. It’s the reality of this observation that makes Yoruba ancestors to coined Olodumare from Olo/Oni- owner, Odu-mystery, ma/mo-know, Aare- stranger. Hence, the owner of mystery/mystical knowledge that knows us i.e strangers in this world than we know ourselves. According to Wande Abimbola (2006), Babalawo that possessed Odu , and usually look into it once in a year are called Olodu. It should be noted that not all Babalawo can be regarded as Olodu, because every Olodu must have attained some level of mystical understanding of the workings of nature and Olodumare.

OLODUMARE, ORUNMILA AND ODU AS WIFE OF ORUNMILA

The concept of marriage, husband and wife in Yorubaland goes beyond traditional husband and wife, as an older woman can simply refer to and younger one as my husband. It’s used to show close affinity between two entity and individuals. Orunmila did not have Odu as real wife, is just a metaphoric statement used to depict when and how Orunmila seek to possessed the attributes of Olodumare, just as another ese Ifa says he got married to Iwa i.e good character who is also the daughter of Olodumare. Both Iwa and Odu are attributes of Olodumare and not real woman. Orunmila got married with those attributes, and not real woman.

ODU AS MOTHER OF MANY CHILDREN

According to Wande Abimbola, Orunmila is said to have eight children, of which Alare is the first. None of these eight children of Orunmila is birthed by Odu, yet Ifa portray Odu as having many children. One will be tempted to ask, who are the children of Odu? It’s simply you and I who get affinity with Orunmila / Ifa through his the mystical knowledge and understanding he possessed by the virtue of his marriage to Odu.

According Baba Adigun Olosun, Odu is said to be something that is dark, which we cannot see with our naked eye, while Awo Falokun said in black stand for mystery in Yoruba traditional believe system. Corroborating the two views along the various analogies on the usage of Odu, one will conclude that Odu simply means mystery.